History of Circumcision
from the dawn of the human race


Before even considering archaeological or iconographic evidence, there is one compelling reason to believe that the practice of circumcision is of vast antiquity, and that is its global distribution. Homo sapiens evolved in Africa about 200,000 years ago and spread throughout the world from about 125,000 years ago. In this our ancestors were following in the footsteps of many earlier hominid species. Expansion westwards from Asia Minor into Europe was initially hindered by the well-established population of light-skinned Neanderthals, so they turned eastwards, reaching India, southeast Asia and China around 75,000 years ago. [1]. The map (below) shows them arriving in Australia 50,000 years ago, but research keeps pushing that date back, and it now seems that modern humans could have been there between 60,000 and 70,000 years ago.

On the other hand, Home sapiens arrived in Europe about 40,000 years ago, where a limited amount of cross-breeding with Neanderthals gave modern Europeans their pale skins - a great advantage in northern latitudes where a dark skin could lead to vitamin D deficiency. Homo sapiens didn't reach North America until 15,000 years ago, and it took them at least another 3,000 years to get down to South America. The most recent 'developed' country to be settled by humans was New Zealand, just 1,500 years ago. (Again, the map is a little misleading here - it seems to show that New Zealand was settled by Melanesians, but in fact the settlers were Polynesian.)

Human migrations out of Africa. [2]

Circumcision is widespread in Africa, and it could therefore have been the custom of the earliest modern humans - and even some of their predecessors. Various considerations suggest this, particularly since our closest living relatives, the great apes, do not have foreskins anything like human ones [3].

Looking at what we know of the ancient world, circumcision is customary among the Australian Aborigines (settled ~ 60,000 years ago, and with very little contact to the outer world since then). It was historically common in north Africa and the Middle East (settled over 100,000 years ago) and it appears from cave art to have been common in Europe before the last Ice Age (see below). In east Asia it was the custom of the Mongoliians, the Ainq (original inhabitants of Japan) [4], the Filipinos, and their close relatives the original inhabitants of Taiwan (before successive waves of Chinese invasion). It is universal among Polynesians, except the Maori of New Zealand. It is also universal among Melanesians, except for a few tribes in mainland New Guinea.

That leaves the last continents to be settled - North and South America. Remember, these are being settled by humans 110,000 years after the first exodus from Africa. Yet circumcision is still popular - from the Inuits to the Incas. This is obviously a very powerful tradition, to have survived 200,000 years and a journey three-quarter of the way around the world. No other body modification has such a wide global distribution, and it seems hugely improbable that it could have arisen independently in so many places.

But not every culture practises circumcision, so some must have abandoned it. There are probably several different reasons for this. In times of great stress, when survival is paramount, cultural and religious practices tend to be lost (as when the the tribes of Israel are lost in the desert and gave up circumcision, as told in the book of Exodus). The last Ice Age, which turned much of Europe into a frozen wilderness, probably led to the abandonment of circumcision there. The stress of adapting to a very different terrain was probably why all but one of the Polynesian tribes who settled in New Zealand gave up the practice. Other reasons include making your group different from your rivals, as with Jews and Philistines (Pelistim, or Palestinians) which are always depicted as battles between circumcised and uncircumcised. Edomites, Ammonites, Midianites and Moabites are all mentioned in the Bible as circumcised. Curiously, by 500 BC Herodotus resported that Philistines were circumcised. Among the major civilizations of the region Egyptians were circumcised, while Babylonians and Assyrians were not. We know, too, that the Arabs were circumcised long before the time of the prophet Mohammed.

An 11th century BC engraved ivory tablet found at Megiddo (Armageddon) in northern Israel. A procession including two circumcised captives (Jews?), is being presented to a king. From [5].

In the past two thousand years the spread of the world's great organized religions has confused the picture. We are never likely to know much about the foreskin status of the oringinal inhabitants of the Indian subcontinent since the region is now divided between Muslims (who require circumcision) and Hindus (who reject it). Buddhism, while not taking a strong stand, in practice does not encourage circumcision, though Buddhists tend to wear their foreskins retracted while Hindus do not.

It seems clear that originally circumcision was carried out in the late teens, and was the symbol that sex, and marriage, was now permitted to the young man. In some societies this is still the case, and was in many others until relatively recent times [4] - in the early 19th century the great Zulu king Shaka banned circumcision because he wanted the young men to serve in his army, not chase girls. Marriage was only permitted after military service. However, in even the simplest of hunter-gatherer societies, such as aboriginal Australia, social customs and rules had evolved to regulate marriage, so that this function of circumcision was no longer important. Most societies found that performing the operation before puberty had fewer complications, and also had value in testing the fortitude of boys before they entered adolescence. This probably happened more than 10,000 years ago, though the earliest clear evidence we have comes from Egypt about 5,000 years ago (below). By this time, on accepted Biblical chronology, the Jewish people were already performing circumcision at the age of one week.


Egypt at the time of the Pharaohs

The best-known Egyptian depiction of circumcision is to be found in the “The Physician’s Tomb”, built for Ankhmabor at Saqqara. (Image courtesy of the Wellcome Library) 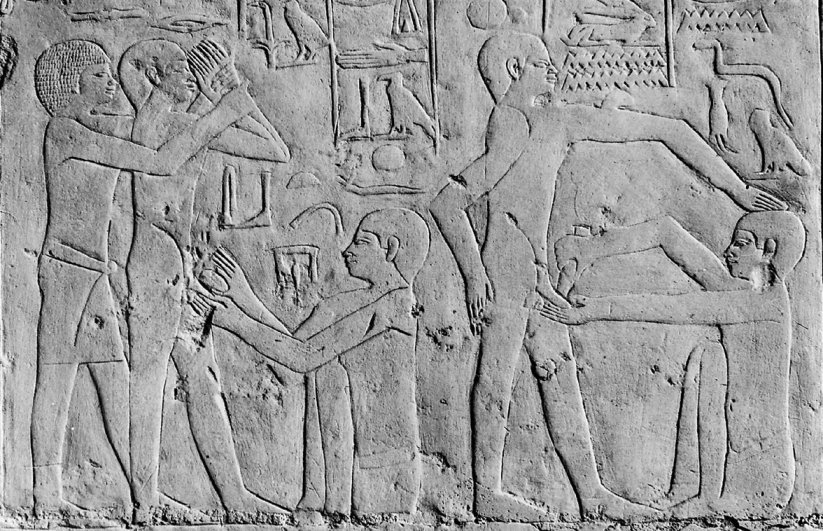 This scene dates from between 2,500 - 3,000 BC. Much hot air has been vented on the age at which boys were circumcised in ancient Egypt and the proportion of the male population that was circumcised. Here we see two boys - the taller one on the right steadies himself with one hand on his hip, the other on the circumciser's head. The shorter one on the left is held by someone his own age (probably the next in line for the operation). The squatting circumcisers, when standing up, would be at least a head taller than either boy, so the boys must be between 9 and 11 in age. This fits with other evidence. The Nicholson Museum in Sydney has a mummy of a boy aged around 6-7, and X-ray images show that he was not circumcised [3]. On the other hand, the statuette of a just pubertal teenager, Meryrahashtef (below, in the Art section) shows clearly that he was circumcised.

The idea that not all Egyptians were circumcised seems to be based on X-ray imaging of the mummy of the pharaoh Ahomse (C16 BC) but this is an exception. In a stele a man called Uha describes his circumcision in a mass ceremony of 120 boys in the 23rd century BC [5]. This hardly seems to make it a minority practice. (He proudly boasts that all took it stoically without struggling or crying out).

The original Americans entered from Alaska, via the Bering Strait. They brought circumcision with them as evidenced by these Inuit stone circumcision knives, but further details of Inuit circumcision are hard to find.

Images courtesy of the Wellcome Library

Nor do we know much of the circumcision customs of the many Native American nations that are now part of the USA, though it is clear that some did circumcise and others did not.

When the Spanish and Portuguese conquistadores arrived in the Americas in the mid 16th century there were three great civilizations present, the Aztecs in southern North America, the Maya in Central America, and the Incas in South America. All practised circumcision. The jungle tribes, such as the inhabitants of the Amazon basin, did not. Again, this probably represents cultural loss in adapting to difficult conditions (one tribe even lost the ability to count beyond 3).

The first civilization the Spaniards encountered were the Mayas. They were an old-established civilization and had rather interesting rules about sex - essentially that intercourse should only occur in matrimony. However, they realized that adolescent boys needed sexual outlets, and hence adolescent homosexuality was not just encouraged, it was compulsory. (This may seem awfully familiar to anyone who attended an English Public School). Adult homosexuality was freely tolerated. It all seems pretty modern and the Maya civilization seems to have been a very harmonious society. But it horrified the Spaniards!

As a result the Spaniards regarded all native Americans as sodomites, even though in both the Inca and Aztec empires sodomy was strictly forbidden and attracted the death sentence. (The Incas seemed to use accusations of sodomy to punish political opponents - shades of 21st century Malaysia). The conquistadores wanted to use this imagined pretext to eliminate the native populations, but the Pope was not having that, and insisted that they should all be converted to Christianity. This meant abandoning circumcision. It also, tragically, meant systematic destruction of their reconds and relics.

One can, I suppose, imagine the learned Dr. Guerra being unable to think of sex other than in the missionary position, but it's surprising to find the broad-minded Reay Tannahill falling for it. Yet she does, and goes into wild speculation about why the Moche may have turned to anal sex. It is quite obvious that what these images show is conventional penis in vagina sex in the 'doggy' position. The Moche never encountered missionaries! Why the missionaries cared what position people had sex in is a mystery (and so is how they knew about it) but the fact is that it wouldn't be called the missionary position if the missionaries hadn't found that most of their converts didn't favour it. In the case of the Moche, it seems they used two positions but doggy style was 3 to 1 favourite.

Thanks to Tom, Eric and Alex, Artsy magazine, the British Museum and the Tate Gallery for images and links and to the Royal Academy, the Art Gallery of NSW and Wikipedia for information.